The Khan Ran Scarf originated among The Khmer Rogue of Laos and Cambodia. A simple cloth scarf, it had possible religious origins going back Centuries. Traditionally, The 3-foot cloth was patterned in a White and Black check design. Worn wrapped around the Neck, or worn freely suspended, it aided in keeping one cool. Other colors variants were known to exist m, but the Black and White version was by far, the most popular and used. By The Vietnam War, The Viet Cong had adopted orcas a form of badge. Worn with the Black Ao Ba Ba, the contrast could be seen on the dark Jungles, and thus identify other Viet Cong Units from one another. Another common “trick” used by The VC, was they often gave hundreds of the Khan Ran away to non-allied Villagers. This caused confusion with American Forces, who saw The Scarf as a VC symbol. 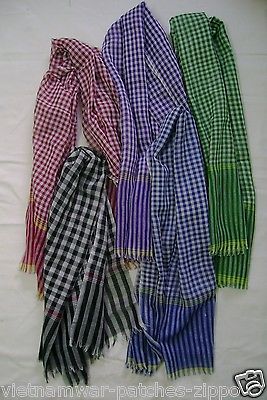