Although the use of “hand-held” explosive devices can be traced to their most primitive forms from The Middle Ages, many attempts and innovations on the theory were put forward during The American Civil War. One such was The Ketchum Grenade. Made of lead and iron, The Ketchum weighed between 1 and 3-pounds. Cylindrical shaped, the explosive “head” of the device was hollow. A “fixed fuse” consisting of a percussion sleeve was fitted into the front (extending several inches outward). Attached to a metal “throwing bar”, The Ketchum had 4 stabilizer fins incorporated into the rear of the device. In practice, a soldier would throw the device towards his enemy. The primitive fins were supposed to keep the device in a semi-arched “flight trajectory”. Upon impact, the fixed fuse would detonate upon impact (sending shrapnel in all directions). The most pressing problem with The Ketchum was the ability to consistently hitting the fixed fuse upon EACH impact. Effective but clumsy, The Ketchum was used somewhat extensively in trench warfare. Both Union and Confederate Forces used the device. The Ketchum was a true precursor to the Trench Grenades seen in World War I. 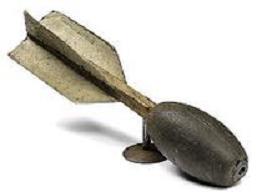