Seen around 160 B.C. - The Kestros was a Greek Regional weapon that used the same principles as The Sling. The device was a solid iron “dart” (roughly 9-inches long). A triangular Arrow Head was fitted on the shaft top. At the end, feather “stabilizers” were also attached. In use, a Kestros Thrower would attach a rope Sling (loose at the Head, but connected to a loop at the rear “fins”. The Sling was around 3 to 4 feet long. Using a “side twirling motion” (much as a Lasso), would be employed. At maximum “speed” (force), the front of the Sling would be released (again the same way as a Sling). In theory the Kestros would then be propelled towards an enemy (causing everything from blunt force trauma to stabbing injuries). A Kestros Thrower would carry a “quiver” with as many as 6 Darts. It would take great amounts of training and skill to properly deploy The Kestros Dart. Almost all historical information is sketchy with regards to exact construction and deployment, however. Very few examples of the actual Dart have been found. 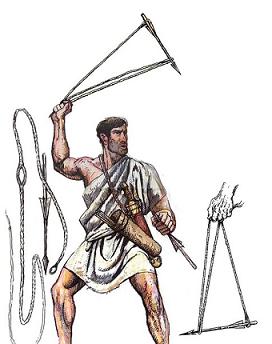