Designed after the standard French Infantry Cap in the 1850s, The Kept was a comfortable and widely used hat throughout Europe. Identified as being useful as an “all-purpose hat”, many State Militias on both sides had already incorporated The Kepi for use. A short crowned cloth crown (irregularly cut to produce a forward slant), the cap component covered the top most portion of the head. It featured a short leather brim to the front. In most cases (although seldom used), an adjustable chin strap was also featured. The Union (Northern) Armies wore almost universally a Dark Blue color. Branch and Unit affiliations were identified by brass stamped insignia (affixed to the top) – with variations known to have been affixed to the front (in smaller size). The Confederacy (The South), quickly adopted The Kepi as well. However, their styling were mostly more flamboyant than their Northern counterparts.

In some cases, the soldier's branch color affiliation consisted of the entire top of the cap being that color. The South also copied the brass stamped insignia badges used in The North - for The Kepi as well. Officers Kepi's were known to be the most elaborate (often featuring metal braiding on the top). The Kepi would continue onward after The War (being replaced in 1900). 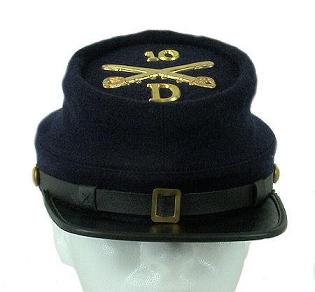 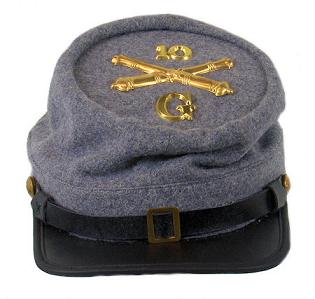