In The Middle Ages, the most popular “Professional” sport was The Tournament Joust. In his event, Noblemen would mounted horses (fully Armored) – as in actual “battle”. Facing opposite and placed into separate (but facing “Lanes”), the two men would “charge” on another. Taking aim at one's opponent with a specially designed “Tournament Lance” (designed to break and shatter on impact). “Scoring” was accomplished by various points given to “strike zones”. Often, Noblemen watching these spectacles, would “record” the points with a Jousting Check. These could be used to later verify any “bets placed (gambling)”. The Jousting Check was an early form of the “Betting Form” used in Horse Racing in much later centuries. Information “recorded” ranged (in basic) as follows:

The “list” grew (as did the bets). It was not actually considered a “Noble” thing to gamble (or bet). That was something for “Commoners”. Hence the need for “discreet” Jousting Checks. In some cases, Nobles would have their Servants attend the Event (and record the information). 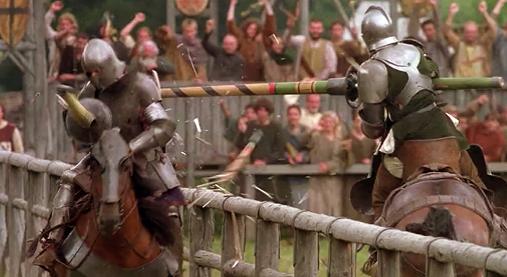