Located near Marblehead, Ohio - Johnson's Island was a Confederate Prisoners of War Camp, ran by The Union Army during The American Civil War of 1861-1865. Built in 1862, the Island was owned by L.B. Johnson  (who ceded the land for this purpose during The War). The Camp was designed to accommodate 2,500 Rebel Prisoners. The only supply point to The Island was by ship. This created a natural "containment", due to deep waters in Summer and partially frozen spots in Winter (the water was well below freezing). Johnson's Island is roughly 66,000 Square acres. A Garrison known as "Ft. Johnson" was constructed and staffed by the 128th Ohio Infantry during it's use as a Military Prison. The Main Camp consisted of 12-two story structures and buildings (which included a Mess Hall, Latrine and Hospital). Outside The Camp, an additional 40 buildings which catered to the Fort's Garrison. Contemporary accounts describe The Island as a "small City".

The most famous of Prisoners held there was Generals Isaac Trimble and James Archer. They held the Left and Right Flanks of General Pickett's infamous Charge at The Battle of Gettysburg in 1863. Unlike the "Hell" of most Civil War Prisons, Johnson Island inmates were treated very humanely. Social life was greatly encouraged. Prisoners had Arts and Crafts and even a small Theater to perform Plays. The Island was nonetheless the target of a credible Confederate Espionage plot which involved the capture of a US Navy Frigate (USS "Michigan"), and shelling Ft. Johnson into submission. The Prisoners would hence be set free. As a result of the threat, Federal Authorities erected two additional Harbor Forts with heavy Artillery, to counter any threat.

It is estimated over 15,000 Confederate Prisoners passed thru The Island. Despite it's treatment and care of it's Charges, over 200 Prisoners died of a variety of causes. They were buried in The Prison Cemetery (where they still remain). After The War, The Island reverted back to it's Owner. All of the Prison structure fell away with age and disrepair. The Cemetery is currently a National Historic Site. 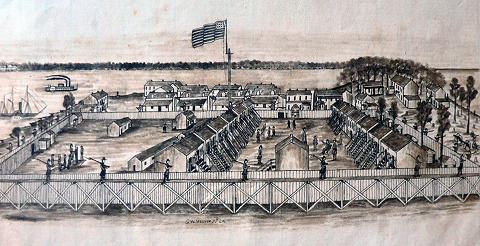