Otherwise known as Johnny Ringo, he was part of the infamous Cochise County Cowboys. Born in Indiana, Ringo was related by marriage (his Aunt) – to The Younger Brothers (another legendary Outlaw gang). He lived briefly in California before moving to Texas in the 1870s. Ringo became involved with the Mason County War (a bloody cattle rights engagement between local Barons). Eventually captured and imprisoned, Ringo's cellmate was the notorious John Wesley Hardin! Without “adequate evidence” to convict Ringo for multiple murders – he was acquitted. Ringo immediately set out for Arizona (to met up with fellow Mason Warriors Ike Clanton and Bill Brocius).

Ringo had a reputation as a “fast gun” and an even worse reputation for his bad temper. He and “Doc” Holiday ran afoul of each other in Tombstone, each calling the other out (for a gunfight). Both were arrested and later released. Although not present at the famous “Gunfight”, many thought Ringo had planned the murder of Wyatt Earp's brother Virgil. Ringo was part of The Clanton's “Vendetta Ride” against The Earps. Much legend and myth surrounds his death. It is said that he and Doc Holiday finally met in Southeast Arizona and had their gunfight. Some Historians are not so sure. Ringo's body was found (dead) – from a gunshot wound to the head in 1882. Many point to the fact that it was suicide. Ringo was a known “fast gun” and no doubt used many weapons in his career as a criminal and Border Ruffian. His weapon of choice was a standard Colt .45 1880 Double Action Revolver. The trigger and hammer were modified for fact action (as befitting a Gunfighter). 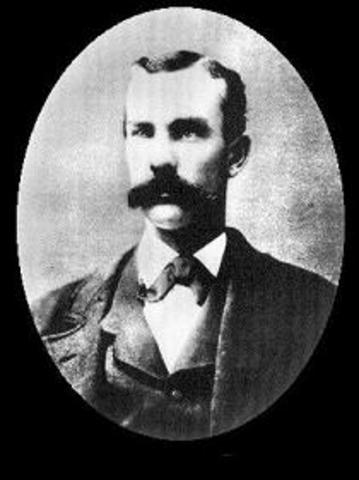