Possibly the youngest Pirate in History, King was born in 1706 in England, his Family had sent him to live with a Relative (as an Apprentice) – in Jamaica. His ship was attacked by Pirates. The Captain, infamous “Black Jack” Bellamy – offered the young lad (8 years old), a position on his ship (as “Powder Monkey”). Freely serving, King participated in many of Bellamy's “takes”. He was with him when Bellamy took his now famous Flagship The “Whydah Galley”. In 1717, “Whydah” was lost in a severe storm of the Coast of Florida. King was lost in the wreck. Amazingly, his “remains” were identified when The “Whydah” was discovered in 2006. A “small” leg bone, shoe and piece of stocking were originally thought to belong to a “Seaman of small stature”. It was later determine to be that of a young boy! 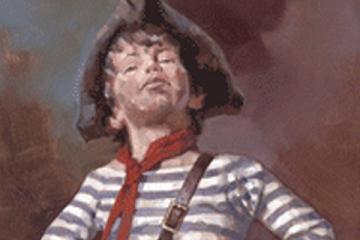