His life is very obscured (and possible fabricated, according to some Historians). Almost all his information (and legend) comes from “The General History of Pirates” (from 1724). Possible born in Wick, Scotland in the late 1680 – Gow was somewhat educated and apprenticed as a Seaman. Unknown as to why he chose the life of Piracy, it is speculated that in 1724, Gow tried to induce his ship's crew to mutiny and take over the ship. This failed and Gow had to run for his life (making his way to Amsterdam). Making his way to Italy, he was able to finally recruit and crew (and ship). Operating in The Mediterranean, Gow and his crew harassed British shipping somewhat effectively. Gow would eventually capture a British Sloop an rename her The “Revenge”. Operation now off The Iberian Coast, Gow and his crew had made such a name for themselves, that The British Royal Navy specifically sent specific warships out for his capture or destruction. Captured in 1725, he was hanged. However, the Executioner was not well versed in his craft and Gows neck did not break. Slowly chocking to death, nearby friends waited until the Executioner had left his post and they grabbed his legs (pulling him until his neck finally broke). Gow's body was tarred, feathered and gibbeted (as a warning to other Pirates). 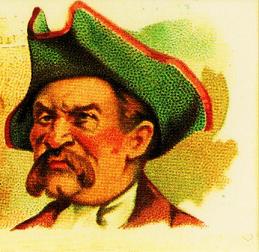