Born in Mainz, Germany in 1400 – his “full” name was Johannes Gensfleich zur Laden zue Gutenberg (he had adopted the last name of the Family with whom he lived). Apprenticed to a Jewelsmith – Johannes became well known in his youth for his great attention to detail with regards to his work. As a man in his 20s, he became involved with many lawsuits that he leveled against persons who had refused to pay for for his work at crafting “Pilgrim Badges”. These metal (and some gold) pieces were made (at request) for those who had made various pilgrimages to The Holy Land. Gutenberg had himself “gone into hock” with creditors to procure the needed fine metals and precious stone. They wanted their money – Johannes wanted his. The legal system in Germany (at the time), was not the best. It could sometimes take years for these “simple” cases to work their way through. During this time, Gutenberg began to experiment with miniature “type setting”, or the engraving of letters onto soft lead “lines”. These lines he found, when covered in ink (a special formulation of his design) -and pressed on plates covered with fabric – produced an “inverted copied image”.

Gutenberg entered into a partnership with Johann Fust (a wealthy financier who was much impressed with this “print” idea). Fust bankrolled Gutenberg who at this point, had refined his technique (and his “movable type press machine”). Still, Gutenberg needed more time to experiment. This was something that Fust did not want. He “called in his loan” on Gutenberg (who could not repay). Fust took all of Gutenberg's equipment (as well as his notes on his techniques), and his plates (42 lines actually) – of The Psalter. Gutenberg had a “trusted” assistant (Peter Schoffer). Well bribed by Fust, Schoffer began to print The Pslater (1455). Promoted as a “book of Prayers”, Fust began to amass large sums. Ironically, Gutenberg's name was removed from any reference (all credit went to Fust and Schoffer). Gutenberg tried unsuccessfully to bring suit over his work.

By the mid 1460s, Gutenberg tried to regain his reputation by perfecting his technique so that it would surpass anything being done at the time. Moving to Bamberg, Germany – he published several Bibles (completely in German), as well as various Prayer Books. By this time also, Johannes was beginning to lose his eyesight (a terrible thing for a Printer). Most Printers now, had perfected Gutenberg's techniques (and some innovations of their own) – to a point that nothing Gutenberg could do would have been considered “new” The Bishop of Maniz (a friend of Gutenberg) – knew of his wrong. Unfortunately, there was nothing he could do to help him – save providing him with a modest pension. Gutenberg died in 1468 without ever knowing that (many centuries later) – he would finally receive the credit he well deserved. 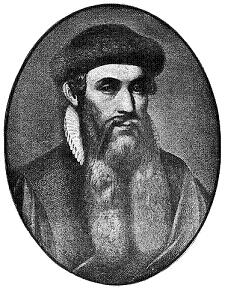