Jean Lafitte was a French-American Pirate and Privateer who operated in The Gulf of Mexico. Possibly born in France around 1780 he made his way to Haiti. He eventually emigrated to Louisiana (New Orleans). He spent much time learning the canals and bayous in and around New Orleans. Lafitte''s eldest brother (Pierre), became a Privateer and later ran a receiving warehouse for stolen property (catering mostly to Pirates and Privateers). Jean''s knowledge of The Gulf of Mexico and of the Louisiana wetlands assisted his brother in their ventures. With America making The Louisiana Purchase a reality in 1803, they passed The Embargo Act. This forbid US shipping from docking at any foreign port. This created much problems to businessmen in Louisiana who – now had to rely of Privateers to move their cargo (at a great fee). Establishing Barataria (a isle in The Gulf of Mexico) as their “storage hub”, this “Pirate way-station” became Lafitte's main operating center between New Orleans and The Caribbean.

Lafitte established a “Pirate Auction House” (called The Temple), where Merchants could come and trade and barter with Lafitte. Still unsatisfied with his role (and wanting even more money) Lafitte began to capture and purchase his own Fleet. Eventually operating 4 Sloops (all outfitted with guns). Flamboyant, Lafitte flew an all Red Flag as his colors. With The War of 1812, America did not have a strong Navy. It began to issue Letters of Marque to an Privateers who would assist in the American Cause. Lafitte began to capture British shipping (and keeping the good for themselves). The Louisiana Governor was still annoyed with Lafitte's past as running against revenue, (and disregarding Lafitte's Marque), sent 40 soldiers into the swamps of New Orleans to arrest Lafitte. Captured without bloodshed, Lafitte (a wealthy man), pay the bond for himself and crew. They ran out on the trial. Free on the sea, even England approached Lafitte with an offer to assist them in taking The Gulf and the vital New Orleans. Refusing their offer, Lafitte still felt the US would prevail against The British and returned to offer his services to the US. Unfortunately, a US Fleet attacked Barataria (fearing Lafitte had turned to the British). His Fleet was captured or destroyed (and much of his stored wealth).

Imprisoned again, Lafitte would find a strange ally in the guise of General (and future US President) Andrew Jackson. A large British Army was advancing towards New Orleans. General Jackson met with Lafitte and a deal was struck for he and his crews to assist in the defense of the City (having only 1,800 men). They manned artillery and fired muskets with such effect, that their assistance may have very well been the reason New Orleans was saved. Lafitte and his men were officially pardoned in 1814. Lafitte and his brother would later serve as spies for Spain (against Mexico) and would found their own Colony in Northern Mexico. Lafitte's “”headquarters” was built to resemble as ship. He called it The “Pride”.The Colony made a go of it until a series of unfortunate incidents with local Native Americans resulted in a massacre of most of The Colony. Lafitte (although now married with a child), went back to his Pirate activities in The Gulf of Mexico.

The “Enterprise” made short work of him (chasing him off). Lafitte took another vessel The “General Victoria”. He sailed to Colombia, South America – were he was granted a commission in their Navy. Commanding a Schooner, he even came to the aid of an American Ship in distress (making him famous again as a hero in American newspapers). Operating off Omoa, Honduras in 1823, Lafitte and his ship engaged several Spanish ships. The three ships fired broadside after broadside into each other. By morning, The Spanish ships had retreated and Lafitte was dead of injuries. His name and legacy is still very much apart of New Orleans culture. 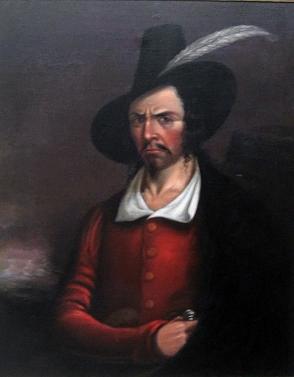