Sometimes placed in the “Lamellar Family” of Armor, “Bell Armor” (or Yoroi), was among the first types developed in early Feudal Japan. Composed of “woven” and “solid” wood materials (Bamboo), they were reinforced by heavy linen or leather patterns. The component suit was made of 2-pieces (but the construction of “The Bell” Skirt, was actually 4-pieces). Shaped in an almost “triangular” pattern, they were slipped over the head (or stepped into). The Upper Breast and Backplate (one component), was also slipped over the head. The 2-components were attached via silk or leather straps. Bulky and heavy, they were wide (as a Bell opening), to provide maximum range and motion of legs and lower body. Seen around the 12th Century, they were soon replaced (due their almost exclusive use by “Foot Samurai”) and their total inability for use by mounted Forces. Versions were still retained for “Ceremonial” usage however. 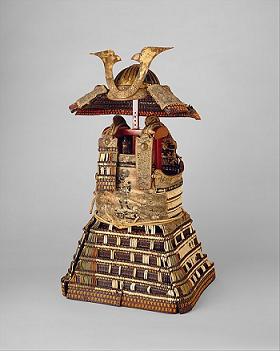