The Yokosuka D4Y4 Dive Bomber, was known to her Pilots as "Suisei", or "The Comet". Allied Fighters called her "Judy". Debated as one of World War IIs "fastest Dive Bombers", her full production was too late in The Pacific War to be effective at slowing The Allied advance. The D4Y4s main claim to "fame", is that it was this Class of Aircraft most used in the "Suicide" attacks - or "Kamakazi" assaults towards the end of The War. The normal Bomber configuration was as a twin-seater. Roughly 34-feet long with a 40-foot wingspan, "Judy" could carry 1,100 pounds of munitions. She was also armed with twin wing mounted 7.75mm Machine Guns, and a Rear mounted 7.92mm Machine Gun.

Using a 1,400 HP Engine, The D4Y4 could achieve an airspeed of 550 mph. It's operational ceiling was rather "low" at 10,700 feet. When configured as a "Suicide" Fighter (known officially as a "Special Strike" Class-Fighter), only one MG for basic defense encounters enroute to it's target was afforded. The remainder of the aircraft interior space was packed with 1,700 pounds of explosives or fuel. Designed primarily to impact Allied Aircraft Carriers, several "Judys" could cause considerable damage. The tactic was implemented in mid-1944 in The South Pacific War Theater. Some 2,100 were produced up to 1945. 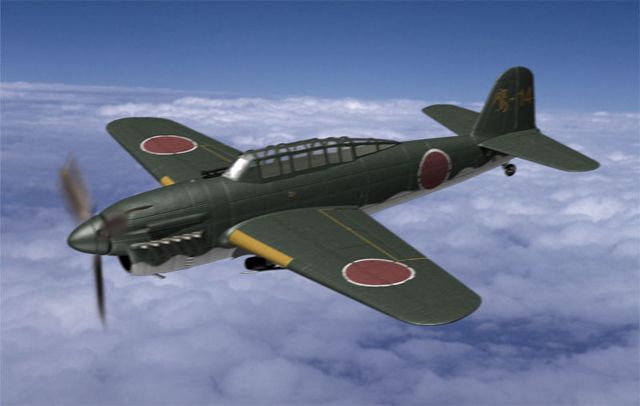