Developed by Imperial Japan in 1944, the Yokosuka MXY-7 was a rocket propelled Glider, that fell into the category of Kamakazi, or "Suicide Plane". Designed along the lines of Nazi Germany's "Vengeance Weapons", the code name used by The Japanese was "The Cherry Blossom" (although it's very nature of deployment earned it the nickname "The Fool", by American Sailors). Designed to be carried by Heavy Bomber aircraft such as the Mitsubishi G4M2, The Yokosuka Glider wad carried mounted underneath the Bomber fusilage. Upon deployment or "drop", the solid fuel propellant was activated by the single Pilot. The 3-Model 20 Rockets could achieve speeds of 400-mph and up to 800-mph on a "dead angle drop" of 80 degrees. Upon exhaustion of the propellant, the Pilot would Glide "The Cherry Blossom" to it's intended target...and his assured death.

2,000-pounds of high-explosives were packed into the Glider. It had a 25-mile operational range, from it's ariel deployment. The Yokosuka were made mostly of wood, thinly covered in aluminum. They were roughly 20-feet long with a wingspan of 15-feet. Over 852 "Cherry Blossoms" were constructed, with most failing to achieve their intended targets (blowing up enroute or falling short during detonation). However, some Yokosuka's were able to achieve significant damage to several American-held land Installations and as well as several Warships. 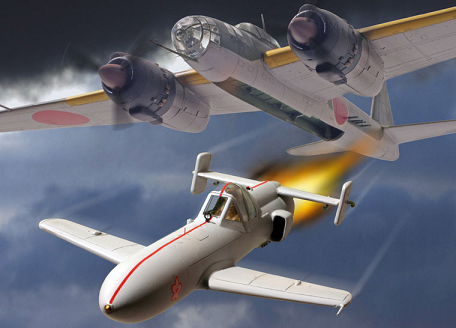