Unlike the previously discussed Sashimono Field Flags (which were Banners mounted to fixed Standard Poles and worn on the backs of The Ashigaru-Class of Soldiers in Feudal Japan, The Uma-Jirushi were massive silk Flags or Metal Devices (similar to Ancient Roman Standards), that were carried onto the Battlefield. Some Umi Flags were 12-feet in length and 8-feet in width. The Standard Pole was as long as 15-feet long and made of Bamboo wood. They were colored and adorned with a Shogunate identifier. Often, a Field General was represented with an Uni Flag. Some Umi featured Metal Devices which likewise symbolized a Shogun or High-Ranking Samurai identifier. In many case, much as with The Sashimono, many hundreds of Umi Flags and Devices were carried into Battle. Although known, The Uni Flag was seldom carries by Mounted Warriors. 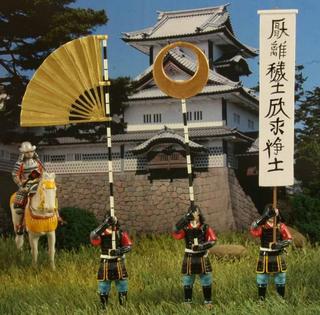