Developed around the 14th Century, The Tetsubo wad a hand-held, close quarters weapon. It was popular with Infantry Troops (Ashigaru) and with Feudal Law Enforcement (Samurai). Made of a single piece of iron, the weapon weighed around 3.5 to 4-pounds. They were made both rounded and hexagonal in shape. Rope or cloth was used as a hand grip. A similar cloth loop was attached at the end of the handle. The allowed The Tetsubo to be "hung" from a metal hook, attached to a belt. Capable of moderate to severe blunt force trauma, the weapon was the early form of both "Sap" and "Baton". 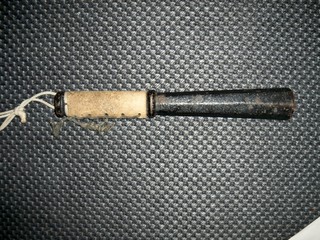