Developed for use by Feudal Japanese Teppou Ashigaru Soldiers (''Gun Footmen''), these Soldiers used early primitive Matchlock forms of Firearms (14th Century). Although suffering from range, as with most of these weapons they were very deadly at close range. Japanese Armor (while sturdy), was no match. The Japanese Samurai and Common Foot Soldiers (Ashigaru), were not users of Personal War Shields for defense (as were their European Knight counterparts). Their lack of use was seen more as a violation of “personal” Honor and linked with The “Code of Bushido”. However, their use was re-examined with the advent of firearms. So was invented The Takekaba Field Shield. There were (2) forms of Takekaba.

The first and most common was a Pavise-style Shield. These were flat boards roughly 4 feet in height and 2.5 to 3-feet in width. Much as with The Pavise, an Ashigaru could “carry” these with the aid of fastened Handles on the inside of The Takekaba. Once a Rank of Ashigaru Archers or Teppou were formed to the front of an Enemy, they would place multiple Takekaba and set them up with attached wooden braces which allowed them to stand freely. The Shields were 3-inches thick. Soldiers could them “shelter behind” them for a basic form of “cover” from Enemy arrows or low velocity leaden shot from Enemy Matchlocks. These Shields were painted (again much as were The European Pavise), with a symbol of their Shogunate. Most were plain, others were brightly painted.

With the advent of more powerful and accurate high-velocity firearms (Muskets), The design of The Takekaba radically changed. Now, Ashigaru gathered large bundles of pre-cut Bamboo wood. These pieces were joined together and tied in groupings of 20 to 30 stacks. As many as 50 to 100 of these Gabion-style Takekaba were gathered and placed as a form of Defensive Wall. The overall strength of the Bamboo wood in it's thickness was sufficient to stop most ammunition and shrapnel. They were moderately light and (1) Soldier was able to carry and place one bundle. In time as Firearm and Artillery began to evolve, so to did The Takekaba eventually disappear from Japanese battlefield tactics. 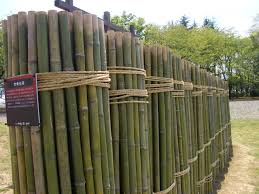