Coming about in 11th Century Japan, a Ronin was a Samurai who had no “Master”. Originally looked upon as a disgrace to ones oath to “The Code of Bushido”, - Ronin's existed on the fringe of Japanese Society. Per a Samurai's Code, if one's Master was killed (by fair means or foul) – even deposed, a Samurai was expected to follow through with ritual suicide or “Seppuku”. Those Warriors that did not, were seen as a disgrace and named “Ronin” (sometimes translated to Vagrant). To be a Ronin was NOT a good thing (by Feudal Japanese standards).

These “men without a Country” were sometimes composed of the “Lesser Class” Nobles (although some well-off and well-known Ronin's existed). Often, their Swords were their only possessions (or a Bo Staff). Still skilled and deadly in their martial arts crafts, many Ronin's became mercenaries for hire. Although distasteful for a Shogun or Warlord, the hiring of Ronin's was seen as a shrewd tactical move (especially when Clan Wars reared). A Ronin worked for pay. Although he still carried some of The Code of Bushido in his lifestyle, he was still motivated by money (something a true Samurai was not). Some Ronin became well known Bodyguards for well-off Merchants.

Yet still, some became well-known Highwaymen and Brigands. By the 17th Century, there were many Ronin (due the the loss of many Masters in The Clan Wars). A sizable number of Ronin's were offered “renewed status” if they participated in The Keian Uprising (1651). This was an attempt to overthrow the Tokugawa Shogunate. The Uprising failed (with the death of thousands of Ronin). Eventually determined to a “great risk”, many future Shoguns, Warlords and Emperors finally (it is assumed) eradicated The Ronin class. 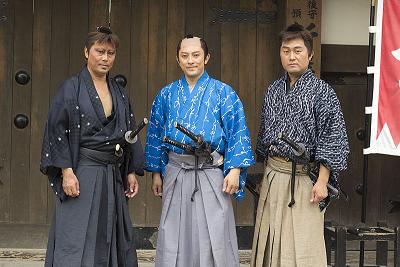