Japanese Order of The Rising Sun

Seen as one of Imperial Japan's first Military Awards, it dated to 1874. Japan at the time was undergoing extreme modernization within it's Military and was turning away from it's Ancient Military Traditions. Creating a modern Army, it emulated it's Military Advisors (America, Germany and England). This was true of it's Military Awards. Originally issued by The Emperor himself, in reality - it was not "The Divine Person" who pinned it on. The Japanese were not allowed to view the personage of The Emperor  (and he was only seen by a very few group of high ranking Officials). If a soldier or Officer was awarded this Award, it was done through his civilian representative, The Prime Minister. Akin to The US Medal of Honor or Britain's Victoria Cross, The Imperial Order was rarely given. It featured a White cloth ribbon, bordered by Red Stripes. The Medal was cast Silver, and was engraved as a Cherry Tree. The name of the Awardee was likewise engraved on the reverse of the Award. Given up to 1944, it was discontinued after World War II, due to it's former "Militaristic" connotations with a "warlike" Japan. 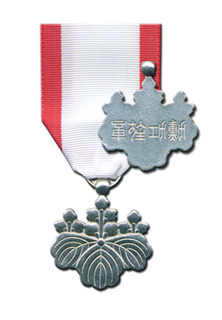