Founded in the 9th Century, The Negoro Gumi were Shingon Buddist. Unlike their fellow religious Order The Soehi, The Negoro specialized in the use of firearms. In addition, they were highly skilled with The Naginata (or Sword Staff). They did unite with other Orders when called upon. The Negoro also operated several schools in the use of firearms for young Nobles (and future Samurai). They were well known for their Gunsmithing technology and innovations towards Japanese firearms. Despite their sometimes “modernistic views”, The Negoro-Gumi shunned “the opposite sex, wine and singing”. They became famous during The Siege of Negoro Temple in 1585, withstanding a larger attacking force of the Warlord Hideyoshi. Often compared to the European Knights of Rhodes (St. John) – after their move from Jerusalem, they too reverted back to a more religious contemplative Order aft the establishment of a modernized Imperial Government. 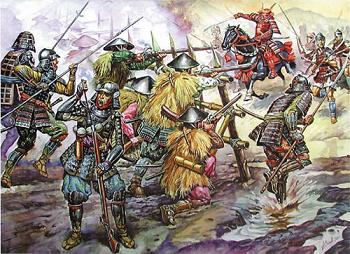