A still well-known symbol of once Imperial Japan and World War II, The current Flag of Japan is known as "The Civic Flag". Traditionally called The Nisshoki or "Sun Mark Flag", it was designed and flown in 1870. The entirety of the Field is White. Centered on the Field is a large Red Circle. This symbol is said to represent The Sun as it rises in the morning from it's point on the horizon. In The West, it was identified as "The Rising Sun". The Nisshoki was also known as The Hinomaru or "Circle of The Sun" (as both Nisshoki and Hinomaru are both correct terms), came to be identified with The Empire of Japan, and it's Symbolism was used widely on military vehicles and assets. The Hinomaru faces controversy even today. After WW II, it's use was restricted due to it's militaristic past. In fact, it was not until 1999 until it was officially "re-adopted". Unlike other Countries that "fly" their Flags throughout their Countries in a "patriotic vein", The Hinomaru is flown only on Government Buildings or for matters of State. It is still in used to identify The JDF (Japanese Defense Force). 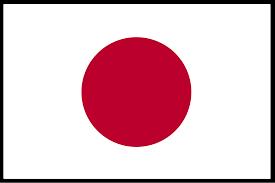