Developed around the 12th Century, The Naginata Spear is best described as a “long sword” attached to a Pole Arm. Used by Front Line soldiers, there were also classed into the “melee” family of weapons. Development was probably from Chinese encounters. Similar to the European Glaive Pole Arm, although different Spear Heads were designed and implemented, traditionally - The Naginata Spear ranged from 6 to 8 feet long (made of wood). Heads resembled short swords (and were single-edged). Blades were also slightly curved and ranged from 10 to 15 inches. The weapons was considered a thrusting as well as slashing weapon. The Naginata Spear was a cornerstone for Japanese Feudal Forces through the 17th Century. 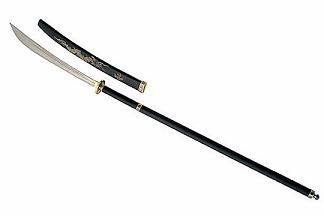