The Japanese Mitshibishi Ki-51 (nicknamed “Sonia”), was first deployed against The Chinese in 1939. A somewhat poor performer for high speed aerial combat, it's “slow speed” nonetheless enabled The Ki-51 to engage faster Fighters as a result of them having to slow down themselves to fight. High performance Fighters did not perform well at such speeds, and this made The Ki-51 – effective. They were also excellent at close ground support of Troops. In this, almost 3,000 were produced up until the end of The War in 1945. The Ki-51 also proved effective as a Kamikaze (or Suicide) Attack Plane (and one of Imperial Japan's last) In fact, (2) “Sonia” Ki-51 Fighters were the last to attack an American Warship on the same day that The Atom Bomb was used over Hiroshima (1945). These two Fighters sunk a surfaced American Submarine (The USS “Bullhead”).

Crewed by (2), The Ki-51 was 31-feet in length with a wingspan of 40-feet. They were powered by a single 14-cylinder Engine that allowed for 263-mph with an operational ceiling of 27,000-feet. The Ki-51 were armed with (3) 7.7mm Forward firing Machine Guns – with (1) mounted Rearward. The could support either 450-pounds worth of Ordnance or 500-pounds if configured for a “suicide” Mission. Many Ki-51 made their way into The Chinese Air Force, with most retired by 1953. 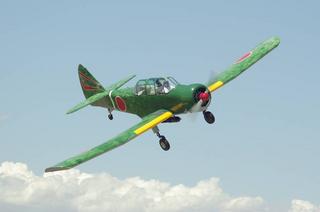