Possibly used by Chinese Forces as early as the 3rd Century A.D. - Mempo Armor was simply a metal facial mask worn on the face for protection. Although not used by all members of the Samurai Warrior Class, it was still a popular form of protection. Japanese helmets were not designed to incorporate Visors (as on European versions). Therefore, the need to provide protection to the face became and issue. Enter the Mempo component.

These pieces were VERY stylized with regards to manufacture. They could be less than to over 1-inch thick. They only covered the initial front of the wearers face. Some variations developed covered only the lower portion of the face. Made to reflect “The Warrior's Spirit – or Code of Bushido”, often frightening visages were carved into the masks to convey fear and anger (possibly one of the first “psychological warfare” examples).

As Mempo development progressed, a form of Gorget (or neck protection) – involving a metal or reinforced bamboo “skirt” were applied. Mempo's could be affixed to the face and head by silk cords (tied at the back), or metal hooks (which were affixed to the sides of the helmet). Full facial versions also included a “detachable nose”. There were literally hundreds of variations of Mempo's made. They reached their height of use around the 15th Century (The Edo Period). 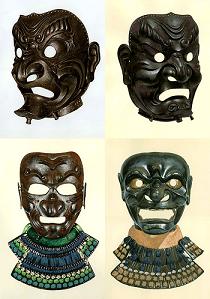