The ''Kuge'' was a term given to a Class of Medieval Japanese Nobility that were specific to The Imperial Court. As such, these Families had immense power, even over other equal Nobles – simply because of their position within Court. The Class was dominate in the 12th Century AD. The Kuge were great Patrons of Art and Culture. Often a ''word'' from them could ''make or break'' an Artist (as being recognized meant certain implied Imperial favors). There were (7) specific Classes of Kuge within the Noble Class.

By the 13th Century however, Class was also used to describe even ''Socially accepted'' Commoners. These ''Lower Classes'' were actually Workers hired by The Palace of The Emperor. They worked fields, kept The Royal Household's Homes, cooked and served food. Thoroughly vetted – these Class of Kuge were seen as very important to The Royal Household. The difference in wealth status however, could cause ''riffs'' between ''true'' Nobles and ''Commoner'' Kuge. By the 19th Century, The Kuge as a specific Noble Class waned. The term was used to identify some Geisha, Actors and even certain ''chosen'' Religious Monks. 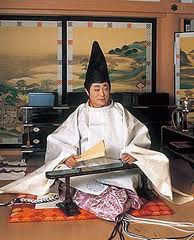