Dating to the 14th Century, Kikki Armor was a form of protective armor favored by foot soldiers of the Lower Class. In construction, The Kikki was composed of several component pieces (arms, chest and legs). Heavily padded quilting of wool or similar soft material, lines of small hexagon shaped pieces of plating were interconnected (usually by wiring). The Kikki Armor was similar to a European Gambeson with external plating attached. They were considered “soft armor” and were deployed with many Melee Troops. Various design patterns were made throughout the centuries. 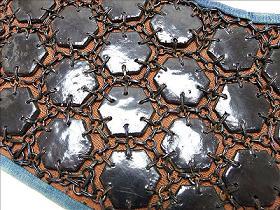