The Kayaba Ka-1 Auto-Gyro was an Observation Platform used by The Imperial Japanese Army (and briefly Navy) – during World War II. While many Nations had experimented with Gyrodyne and Auto-Gyro prototype, The Japanese Army developed a working Model and deployed them, with a moderate degree of success on the battlefield.

Although not a ''true'' Helicopter , The Ka-1 was well on the evolutionary step to that Class of Aircraft. Bearing similarities with Japan's allies The Germans and their Gyrodynes used by The Kreigsmarine, The Ka-1 was used originally as an artillery observation and spotting platform.

98 Models were produced between 1941 and 1945. In addition to Observation duties. The Ka-1 was also used as an Anti-Submarine platform. These Models were deployed from Warships in The Pacific Theater (although no Allied Submarines were ever known to have been sunk by direct action with a Ka-1).

Only blueprints survived The War (with no surviving Models having). Based of the plans (and surviving photographs), The Ka-1 was Crewed by (2). They were 30-feet in length with a diameter of 5-feet. As an Auto-Gyro, The Ka-1 had (1) Argus 10c Engine which power the Main Rotor (Top) and the Forward facing propeller. The V-8 Engine produced 240-HP. The Auto-Gyro had a 40-foot Top Rotar radius. The Ka-1 could achieve 108-mph with an 11,000-foot operational ceiling. They had a 170-mile Mission range. 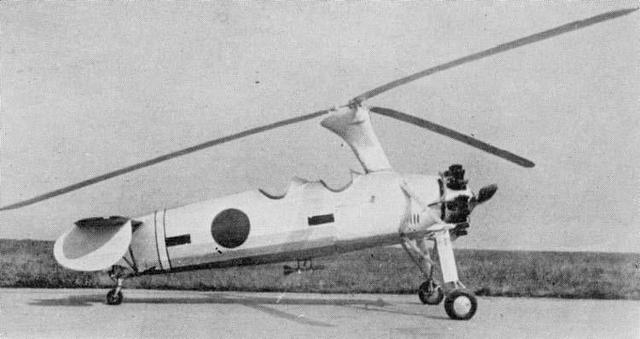