Also meaning “War Hat”, these were some of the earliest forms of protective head covering used in pre-Feudal Japan. The War Hat would continue onward well into then 16th Century. Originally made out of woven, layered straw - they were a flat and wide brimmed hat. Seldom used by the more “sophisticated” Samurai Warrior, they were often issued to their Retainers (or Squires). By comparison, The Jingasa was akin to the European “Kettle Hat”. By this time in The Jingasa development, they were constructed from heavy shaped leather or a single piece of copper. A single leather strap was used (tied under the chin) – to secure The Jingasa to the head. They were also used by some Archery Units. 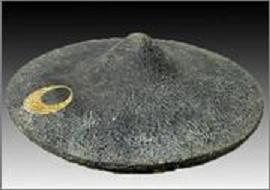