Constructed in 1589 in Hiroshima, Japan – was literally the only structure in the Region of Hirsoshima. The Village (and later City), developed around the Castle for it's support. Originally occupied by Mori Terumoto (a member of The Five Elders – a ruling body), Hiroshima was the seat of power which controlled no less than 9 provinces. The Castle was lost during The Battle of Sekigahara (1600) and fell into the victor of the battle (Masanori). The new Governing Shogun forbid any Castle construction, so Hiroshima sat unrepaired from the battle for almost 20 years. In 1620, Hirosshima was again badly damaged by a flood (which prompted permission to rebuild and renovate).

It was at this time that yet another Lord took control of the Castle. Hirsoshima remained with this new Noble Family until the 1890s, when it served as Imperial Army Headquarters during The Sino-Japanese War. It remained as a part of The Army's “Command and Control” structure well into World War II. Thus, being considered a “military target”, Hiroshima Castle was destroyed as the result of the Atomic Bomb dropped on the City in 1945 by American Forces.

Oddly, it was thought that Hiroshima Castle was completely destroyed in the explosion. Evidence suggests that the explosion destroyed the support pillars. Within several days the rest of the Castle collapsed in on itself. It was completely rebuilt in 1958. Originally constructed of wood, most ot the original structures were replaced by stone in 1599. Consisting of 5 floors, it is roughly 140 feet in elevation. Of note 3 trees are still quite alive (and can be seen), that survived the atomic blast. 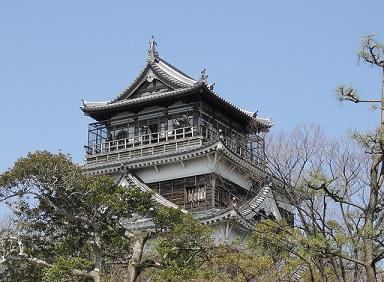