Developed in the 14th Century, The Hamidashi was the equivalent of The European Dirk. They were a favored weapon of Assassins (Although NOT necessarily a Ninja weapon). The Hamidashi was a single-edged blade which varied in length between 8-12 inches. They also featured a slight curve. The Hamidashi was noted for their handles. They were wrapped in shark skin and allowed to dry. Creating an almost leather construction. Upon which, a series of tight cords where wound tight. They were fitted into custom scabbards designed to fit only the blade on which it was made for. The Hamidashi was easily concealed within robes. Some were also carried as personal defense weapons used by Royalty. 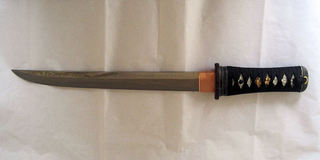