One of the first “Western” designed Warships builr for Japan, “Hosho” was built in The United Kingdom. Known as “The Phoenix”, “Hosho” was launched in 1868. She featured triple reciprocating screws with twin boilers (steam). She was also capable of sail propulsion. She displaced 325-tons and was 40-feet long. Crewed by 65, “Hosho” carried 2 Guns (Forward and Rear Mounted) 7.5-Inchers. Originally serving a Shogunate, “Hosho” became famous during The Battle for Meji Restoration in 1871, for her defense of The Harbor of Edo. Transferred to the new Imperial Navy in 1875, “Hosho” was retrofitted and declared a “Gunboat”. In 1877, she participated in the infamous “Samurai Rebellions” - supporting Government Troops. She last served in combat during The Sino-Japanese War of the 1890s. Considered obsolete, she was scrapped in 1908. 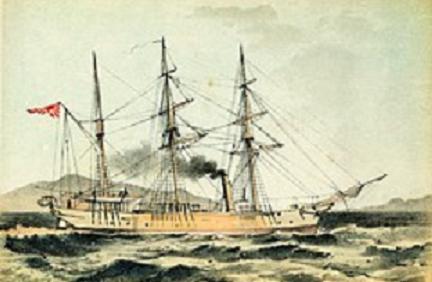