The ''Chiyodagata'' was the first domestically built Imperial Japanese Warship. Launched in 1863, The Ship was a ''Gunboat'' – Class of Vessel. Japan, wishing to modernize it's Military along the lines of European Models, spent Millions to purchase ''Modern'' weapons, Warships and of course – Advisors, to achieve this goal. The Country also realized that it;s natural resources were limited. It had to rely on import of materials needed to create it's own Military (Army and Navy). The ''Chiyodagata'' was the ''fruit'' of it's first attempt.

A Steam Vessel, She was 140-tons displaced and was 98-feet in length. Her Beam was 16-feet. Although Steam, ''Chyodagata'' was equipped with Twin Masts and could deploy a Semi-Full Rigged Sail Pattern if needed. Her Coal fired Engine could achieve 60-HP (or slightly over 5-mph). The Gunboat crewed 35 Officers and Men. Armament included (1) 6-inch Cannon and (2) 6-pound Guns.

Present during The Boshin War (A Civil War between The Ruling Civilian formed Government and former Shogunates), in 1866 – ''Chiyodagata'' sided with The Shogunate. She was captured by Imperial Forces and beached to prevent usage (until repaired and re-floated by Rebels in 1868). She was taken yet again in 1869 and turned into an Imperial Japanese Naval Training Ship. She would remain as such until 1888, when decommissioned. Taken over by a Civilian Whaling Company, ''Chiyodagata'' would serve in that capacity until 1911 (when She was finally broken up and Her scrap sold). 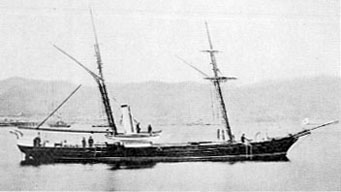