The Imperial Japanese G4M Bomber (nicknamed ''Betty'' by Allied Forces), was a long range Bomber, first deployed in 1939. One of Japan's most effective Bombers during World War II, this claim was based on it's efficient light weight air frame and total lack of protection for it's Crew. As such, many G4Ms did not survive many of their Missions. Over 2,500 production Models were developed by The Mitsubishi Company. The G4M was designed to be land Base launched. They were a principle component during The Solomon Islands and Guadalcanal Campaigns of 1944. Late in The War, many G4Ms were modified for use as Torpedo Bombers against Allied Shipping (despite the ease in which they could be shot down). The G4M Class were nonetheless responsible for sinking The HMS ''Prince of Wales'' and ''Repulse'' off Malaya in 1941.

Crewed by (7), The G4M was 70-feet long with a wingspan of 82-feet. They were powered by Twin Mitsubishi Kasei 14-cylinder Engines, capable of generating over 1,500-HP. The operational ceiling was 28,000-feet. The G4M supported (1) 20mm Tail Turret Cannon, and (4) 7.7mm Machine Guns positioned throughout the airframe. The Bomb deployment packages varied between several Torpedoes, a Massive Ordnance package of close to 2,000-pounds or standard Bombs weighing 500-pounds. 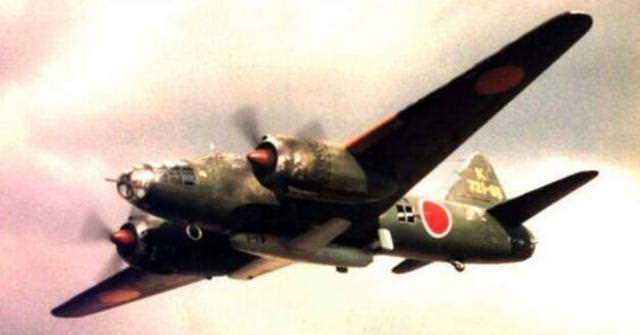