An important structure, the 15th Century Fushimi Castle is located in Kyoto, Japan. It is estimated that some 60,000 workers worked from 1592 to 1594 to complete it. Although a military structure, Fushimi Castle was built as a residence for Nobility (Hideyoshi Family), and as a center for peace talks between China and Japan (to end The Korean Seven Year War). Elaborately furnished, several “rooms”featured gold leaf imprinted into the walls. Great pains were placed in showing Chinese diplomats Japan's “wealth” (and Fushimi Castle was the perfect choice). In 1598, Fushimi was almost completely destroyed by an earthquake. Rebuilt by 1600, Fushimi Castle was the center of an 11-day siege during a civil war between The Mototada and Mitsunari Clans. The Castle held some 2,000 defenders. Set on fire, and with most of the garrison killed, the Commander of Fushimi committed suicide rather than surrender. Left mostly in ruins until 1623, what was left was dismantled and recycled. Surviving examples of some of the stone foundations still bear witness (so as to legend) – to the Commanders suicide (and remain stained). In 1912 a tomb for Emperor Meji was built on the site of Fushimi Castle. In 1964, a full sized replica of the Castle was constructed (next to the original site). 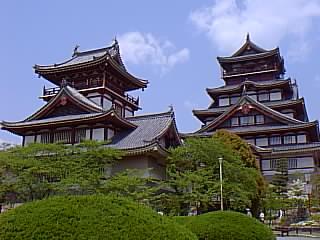