An early Straight Sword, they were developed around the 3rd Century. Design type was no doubt borrowed from Japan's military involvement with China and Korea (throughout the early centuries). The design pattern for Straight Swords would remain constant. Chukuto Swords are often “classed” into the 6 Era Types (known for their manufacture). On average, The Chokuto was between 20 and 25-inches long. They featured a long (6 to 8-inch handle grip, made of bone or wood). Although traditionally a single-edged weapon – early examples were known to be double-edged. Always carried in wooded scabbards, the could be attacked directly to the belt (or saddle of a mounted soldier). Some designs are identified as “Great Swords” (similar to the European Ziwehander or 2-Handed Broadsword). These early versions were around 5.5 feet long (and seldom carried in a scabbard). These early weapons were not quite as “elegant” as the later Katanas. Later, after the inception of a “standardized” war blade for the elite Class – many of The Chokuto blades were regulated to ceremonial (Guard and Religious use). 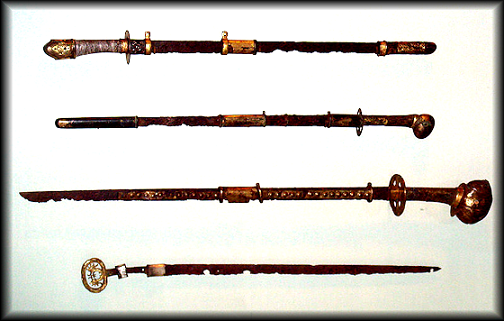