The Japanese “Atakebune”- Class of Warships were developed during The Sengoku Period of the 16th Century. Designed for Coastal Defense, they were the largest Ships built by Japan during the late Middle Ages. A typical Atakebune ranged around 6-tons displaced and were around 200-feet in length. Made of wood, The Atakebune Ship consisted of 3 to 4 Decks. They were reinforced with large Iron or Copper Plates. Atakebune Ships originally did not have a Sail System. Propulsion was achieved by 2 to 3 Decks of Oarsmen. A Rudderman steered the Ship from the Main Deck. A “Command” or Pilot House was the only Main Deck structure visible.

Gunpowder and Firearms were still in their infancy, but Atakebune carried several Cannon and a Squadron of Arquebusiers (Riflemen). Mostly, Archers or Crossbowmen were deployed from the Main Deck. The primary combat tactic of The Atakebune was to ram and Enemy Vessel, and – using Grappling Hook and ropes,  a Boarding Crew would close the two Ships in close and cross over. Several hundred Atakebune Ships were used in The Invasion of Korea in 1582. A common problem with these Ships was with their exposed Upper Deck (which was made of wood). Korean and Chinese combatants began to use a variety of Flamethrowing weapons against Atakebune Fleets (with some success).

In the 17th Century,  attempts to convert The Atakebune Fleet into a Sail System involved Models with twin Masts. However, European Ship building techniques were becoming well known, with The Atakebune style being replaced by copied European Warship versions. 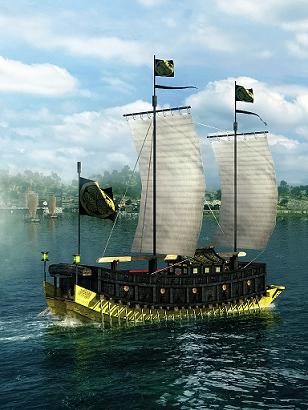