Meaning “Red Castle”, The Imperial Japanese Naval Aircraft Carrier “Akagi”, was one of The Attack Force Squadron deployed against The American Navy at Pearl Harbor, Hawaii – on December 7th 1941. The “Washington Naval Treaty” of 1922 was manipulated by The Japanese which banned or outright required destruction of many of her Battleships and Heavy Cruisers. However, it did not regulated Aircraft Carriers. Many decommissioned Warships would serve as the working Hull's of many of Japan's Aircraft Carrier Fleet (of which “Akagi” was originally a “Amagi” Battlecruiser. “Akagi” was deployed in 1927. As the only namesake of her “Class”, “Akagi” displaced over 42,000-tons (displaced). She was 900-feet long and stood (Beam) at 103-feet in height. The “Akagi” had (3) Decks and she could support (85) Fighter and Bomber Aircraft. Her Armor Plating ranged from 3 to 6-Inches throughout. Her propulsion was achieved by (19) Boilers and (4) Steam Turbines. “Akagi” could make 18-mph in open Seas and without “headwinds”. Her Armament was (6) 7.9-Inch Guns, (6) 4.7mm Guns and (14) 1-Inch Guns.

“Akagi” was used in The Sino-Japanese War of the 1930s. She was picked as one of The Fleet's Aircraft Carriers to participate in The Pearl Harbor Raid. She was chosen by Fleet Admiral Nagumo as his Flagship for The Attack. Anchored 230-nautical miles from Oahu (Hawaii), “Akagi” was the first to launch the first (2) Attack Waves. Her Planes also attacked a Flight of B-17 Bombers (unarmed) flying into Hawaii from San Francisco. Later, “Akagi” was deployed with other Carriers of The Fleet to The Battle of Midway (1942), loaded with 108- Fighters and Recon Planes, she tried (as did both sides) – to located the other's Fleet. Although with the start of The Air War over Midway, “Akagi” damaged – was able to stay afloat and fight The American Navy. At least (30) American Fighters and Bombers attacked “Akagi”. Badly damaged, she still remained in the fight.

Try as they might, and despite their hard won victory at The Battle of Midway – The “Akagi” did not sink as a direct result of Enemy action. However, too much effort was needed to move her to a safe Dock for what would have been nearly a year to repair. Japanese Admiral Yamamoto made the decision to scuttle her. Oddly, to increase American “need” for a “complete Victory” over Japan due to Pearl Harbor, The US Navy stated “officially” that “Akagi” was at first “sunk” and later “derelict and unmanned”. 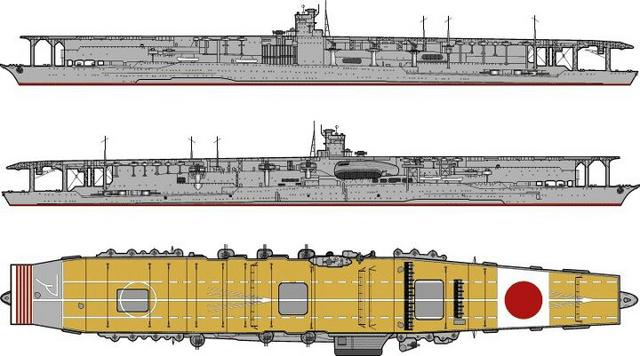