The Imperial Japanese Nakajima A6M2-N (nicknamed ''Rufe'' by The Allies), was a Multi-Purpose Float Plane, used during World War II. It was deployed from 1942 until the end of The War in 1945. Over 390 Models were made, and it's overall design came from the vaunted ''Zero'' Fighter. In addition of seaborne duty with The Japanese Navy, The A6M2-N could also serve as a short range Interceptor. The Class saw active service near The Aleutians and Solomon Islands. The Plane was a particular ''burden'' for American PT Boats in The Pacific. The only surviving ''Rufe'' was captured by The French in 1945 in China. It was used by that Country until the mid-1950s.

Crewed by a single Pilot, the A6M2-N was 34-feet in length with a wingspan of 40-feet. Power came from a single Nakajima Sakae 12-cylinder Radial Engine, capable of 940-HP. Airspeed was rated to 275-mph, with an operational ceiling of 33-000 feet. Combat range was 1,400 miles. The ''Rufe'' could deploy 130-lbs of ordnance and had a robust defensive armament package to include (2) 7.7mm Fuselage Guns and (2) 20mm Wing mounted Machine Guns. 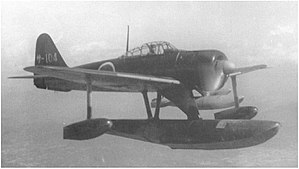