These were elite Ottoman/Turkish infantry units formed in the 13th Century by Sultan Murad I. Originally developed as Royal Household Guards, they were composed of captured (at a very young age) - Christian boys. The slaves were indoctrinated into the Islamic Faith and trained to be fierce warriors. Highly devoted to their Ruler, these "slaves" were allowed to own property and hold various bureaucratic positions. They were well educated in the art of war. Unlike most armies of the day, they were well paid. They existed in an atmosphere similar to the ancient Spartan Agoge system. They lived and trained among each other, seldom having contact with anyone outside of their military "world".

One of their traditions involved the specialized headgear they wore. Called a "Bork", it had a stylized elongated top. In it's folds, the Janissary carried a single spoon. This "Brotherhood of The Spoon" symbolized their comradeship of living, eating and dying with one another.

The Jannisary had an infantry and cavalry branch. Infantry wore blue and Cavalry orange-red. They used a form of the Cuirass Breastplate for protection. Chail Mail was used. The idea of armor was offensive to them, due to their highest honor was to die for their Sultan. They also used the Kijil Sword and rarely used a shield (although they were available). As firearms became available, they were among the first to use them in battle. They were cunning warriors against The Knights Hospitallers at The Siege of Rhodes. By the 18th Century, their honor had tarnished, so much so theat The Janissaries staged a coup against Sultan Mahmud II. He executed some 6,000 of them, effectively dissolving this one time elite force. 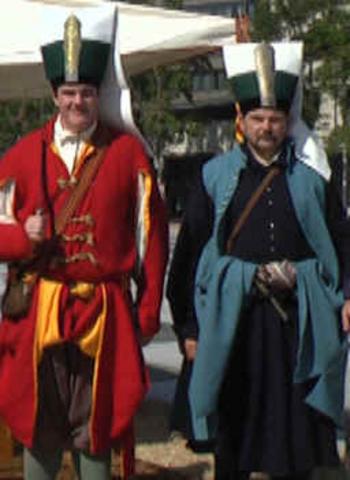