Seen by some Historians as one of The American West ''Twelve Most Underrated Gunfighters'', James Leavy was credited with at least (2) verified examples of what was termed as ''The Quickdraw''. In fact, Leavy was well known as a Quickdraw Fighter, and often never challenged. Born in Ireland in 1842, the cause of His immigration to The United States and what He did prior to His first record gunfight in 1871 is sketchy. But the first incident took place in Pioche, Nevada. The ''rough hewn'' Pioche was a Mining Town for Silver and attracted it's share of ''rough and tumble types''. Hard work, heavy gambling and drinking as well as dying in disputes were the common order of the day there. Leavy sought out work as a Miner.

But it appears that Leavy had another ''talent''. He was a ''natural'' with a gun. Gifted of a quick response and ''dead aim'', Leavy was asked to help guard Mines. The work was much more dangerous than being a Miner, but the ''rewards'' to stop claim jumpers was greater (and quicker). In 1871, he was seen by witnesses to kill several jumpers, dispatching both in what was said to be mere ''seconds''. His ''fame'' spread. Leavy would hire out His abilities to Mining Towns throughout The Old West (some of the very worst ones, it seems).

In 1882, while playing Faro (a game of chance) in Tuscon, Arizona Territory, Leavy got into a dispute with a Dealer of the game (which was about as rigged as any other such to never pay out to The Player). His infamy stopped The Dealer from drawing on Leavy, but feeling much shamed for not ''standing up'', The Dealer hired several Men to ambush Leavy. He was shot without much of a chance to defend Himself (shot supposedly in the back). His ''killers'' were found and tried in Court – but without much evidence to the contrary – they were given very light sentences. Leavy was respected by both legendary Lawmen Wyatt Earp and Bat Masterson – both of whom stated later that ''if'' Leavy had had the chance, His killers wouldn't have had one....... 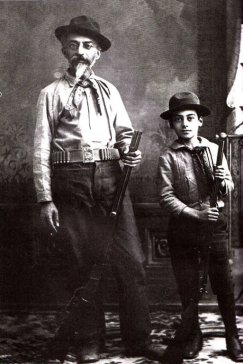