“Necessity Being the Mother of Invention”, many soldiers in the trenches of World War I improvised many of their “personal weapons”, based on their combat experiences. Many used weapons and devices that were new and innovative (and quite dangerous). Many of these devices were not properly tested. Conversely, many weapons and delivery systems lack a proper “supply train” to afford soldiers at “The Front” a steady supply (of anything but bullets, at times). Soldiers began to created their own “improvised explosive devices”. A common device was “The Jam Tin” or “Milk Tin” Bomb. Many food stuffs were shipped to The Front in metal containers. These containers would be saved by the soldiers (especially English and Americans). The can would be cleaned and filled with gunpowder with grenade fuse ignition activators. Filled with stones, metal debris etc. - they would be sealed. The “Pull Fuses” could be activated, allowing the soldier to throw the device. It would detonate much the same way as a Hand Grenade would. 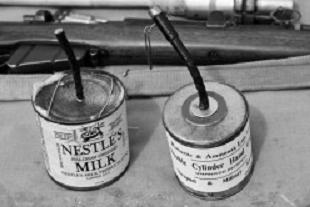