A "Supergun" of The Mughal Empire (a Persianate Society from 1526 to 1857), The Jaivana Gun is considered one of the largest "ancient" surviving cannon in the World. It was commissioned by Emperor Muhammad Shah. Built as defense for The Jaigarh Fort (Jaipur, India) - her barrel was cast in 1720. It was said that it took 4 full grown Bull Elephants just to turn her carriage around. The barrel is made of cast iron and is 20.5 feet long - and weights 50 tons). The barrel bore diameter is 11-inches. For "lifting" purposes, the barrel was fitted with two rings. The Jaivana also features a 30.5-inch elevation screw and had two massive 4.5 foot wheels. It was designed to fire a 110-pound steel projectile with a 200-pound charge. This lends to the legend that The Jaivana had a 25 mile effective range. In fact, many local legends state that many of the small ponds and lakes in the region were made by her shell craters! She was tested at least one documented time in 1720 (when her barrel was cast). The gun can still be seen guarding Jaigarh Fort in India. 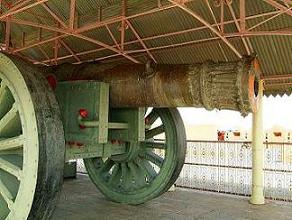