The device known as The “Jacob’s Staff”, was an innovation in Construction, Astronomy and Land Surveying. In addition, The Staff would help develop Land Boundaries which would help establish Treaties with Kingdoms. Although, the origins of The Staff are linked to Biblical Patriarch Jacob, it’s actual use as a form of measurement was not recorded until the 13th Century. Jewish Mathematician Levi Gerson developed a new form of hand measurement he called a “Jacobs Staff”.  The Staff was 3-feet in length and constructed originally of wood (later, brass or metal fittings would be added). The Staff was marked with known Units of measurement,  determined from previously “known” values. Extensions known as a "Transom", were attached at the end and half-way position on the Main Staff.

In Astronomical usage, The Jacob Staff was held to the eye of The User. The far The was aligned with the known azimuth of The Horizon. Distance between Terrestrial and Space or Sky, was thus measured and calculated. In it’s earlier form, The Jacob Staff was used by Ships at Sea, the same way. It would be the predecessor to the later Sextant and Quadrants used for Navigation. The Staff was extremely useful for what would become Land Surveying. Proper determination of Boundaries and Borders were important with regards to Treaties and Tariffs. The Staff would serve as Model for other specific Survey equipment  (although a modern version of The Jacob Staff is still used).

Perhaps the most common use of The Jacob Staff wad with early Castle and Fortification construction. With massive stone Castles came the need for proper height in relation to their foundations. Such came into use The Staff by early Engineers. Conversely,  The Staff could also be used in early  Medieval Warfare.  When Trebuchet and related Siege Engines were deployed, often The Jacob Staff was employed for “accurate” distance computations. 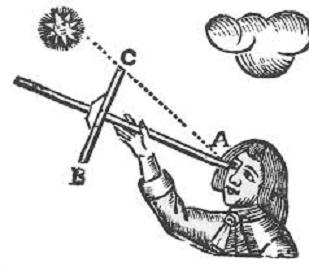