Jack Ward was born in Kent, England in 1533. Probably working on The Coast in Fisheries, he may have served for Queen Elizabeth I during the treat of The Spanish Armada. As a Privateer, he would have been well trained for his “later vocation”. Like many of his day, after his “War” service – he simply kept raiding and became a Pirate. Using his ship The “Grift” (1605), Ward raided The Mediterranean Seas. He battled The “Soderina” in 1607 (which resulted in the sinking of his ship). Wanted for Piracy by many Middle Eastern Port Cities, Ward attempted to seek pardon from King James I (England) – which was refused. Making his way to Venice, Italy – Ward over the years was able to built a “Pirate Fleet” of some 70 vessels (and was considered quite wealthy). Living to the age of 70, Jack Ward was said to have contracted The Plague – and died. 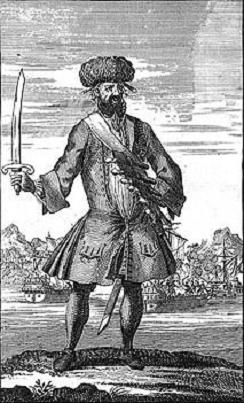