Developed from the more popular Captianesco Hat of 16th Century Italy, The Italianate Hat saw some minor use among Court Servants and Diplomats. Designed the same as The Captianesco, it too was several pieces hand sewn, which extended upwards some 8-inches. Unlike it's predecessor,  it wad not fluted at the top. Colors were often bright and were often paid for by wealthy Nobles. As such, silks and felts would have been used. The more expensive the Hat, the more prestige it showed the Court benefactor. 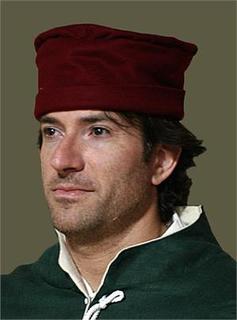