The Passaglia Grenade was a field improvised, hand grenade explosive device – used by some Italian Ground Forces in North Africa, during World War II. Along the same lines of Soviet Russia's ''Molotov'' device, The Passaglia was a metal tube fitted into a 1-lb. Block of explosive. A Model 35 Grenade (of British design), was then attached. The entire affair was wrapped in heavy canvas or cloth, with the grenade pin exposed. Some ''later versions'' also used glass bottles as frames. In practical theory, The Passaglia was thrown onto or in front of, an Allied Tank. The goal was to either dislodge a Tank track, or damage the Turret. The improvised weapon was somewhat effective during several 1944 North African Campaigns. 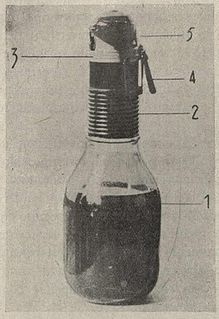