The Italian Fiat G.91 was a Cold War Era (1956) Fighter Jet which was not only popular with The Italian Air Force, but Germany and several other Nations. Combining several designs from other Nations, The G.91 was an effective Light Fighter envisioned for combat against the several Soviet Models then in service. Mass produced until 1977, Variations would persist in some Inventories until 1994. Piloted by (1), The G.55 was 33-feet long with a fixed wingspan of 29-feet. Power was provided from Single Bristol-Siddeley Turbojet which produced 5,000-IBF of Thrust. Airspeed was rated to 670-mph. The G.91 had an operational ceiling of 43,000-feet. Armament included (4) 12.7mm Machine Guns and (2) 30mm Cannon. The Fighter could support a wide variety of Missile and Rocket Platforms. 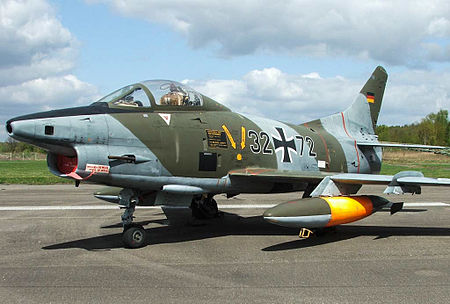