The Corazzieri were originally an Honor Guard of Archers formed by The House of Savoy in Sicily around 1557 AD. Considered an Elite Force, they were also used as skilled soldiers in many of The Civil Wars of the 16th to 17th Centuries. They were formed of 50 Sons and Relatives of Noblemen. By the 17th Century, The Corazzieri had grown to a Force of 400 Men.

Comparative to other Countries as ''Life Guard'' Regiments, The Corazzieri left Italy after the fall of their Kingdom (with their King) – to The French Revolutionary Wars Italian Campaigns of 1789. After Victor Emmanuel ( an Ally of Napoleon) took control of Sardinia, The Corazzieri would be placed under French Control. They were eventually put back under local control after The Wars and were used (in part) as a form of Law Enforcement. During The First War of Italian Independence of 1848, The Guard was instrumental in protecting The King. This Formation would be disbanded in 1867.

Reconstituted in 1868 as a Cuirassier Regiment, they essentially performed the same ceremonial and State duties as their earlier incarnation. Now primarily mounted, they numbers 60 Officers and Men. Serving in World War I, many Guardsmen would join in The Resistance against Germany in 1943. When Italy was again a declared Republic after World War II , The Guard was reformed and continues to serve in State Ceremonial functions.

Recruitment is limited to Italian Citizens, a specific height and body type. All must have prior Military Service. They are still trained in their function for many months including taking a written exam. Most are specially trained in self-defense (for State Protection Services). A special Unit within The Guards also are Snipers and Special Reactionary Responders. They are considered an Modern and Elite Security Service responsible for protection of The Italian President and His Family.

The Corazzieri still retain their 1840s Ceremonial Dress Uniform, to include The Cuirass, Plumed Helmet and Saber. The Guards primary colors are Royal Blue and White. Their regular duty uniform is a working variation of this. 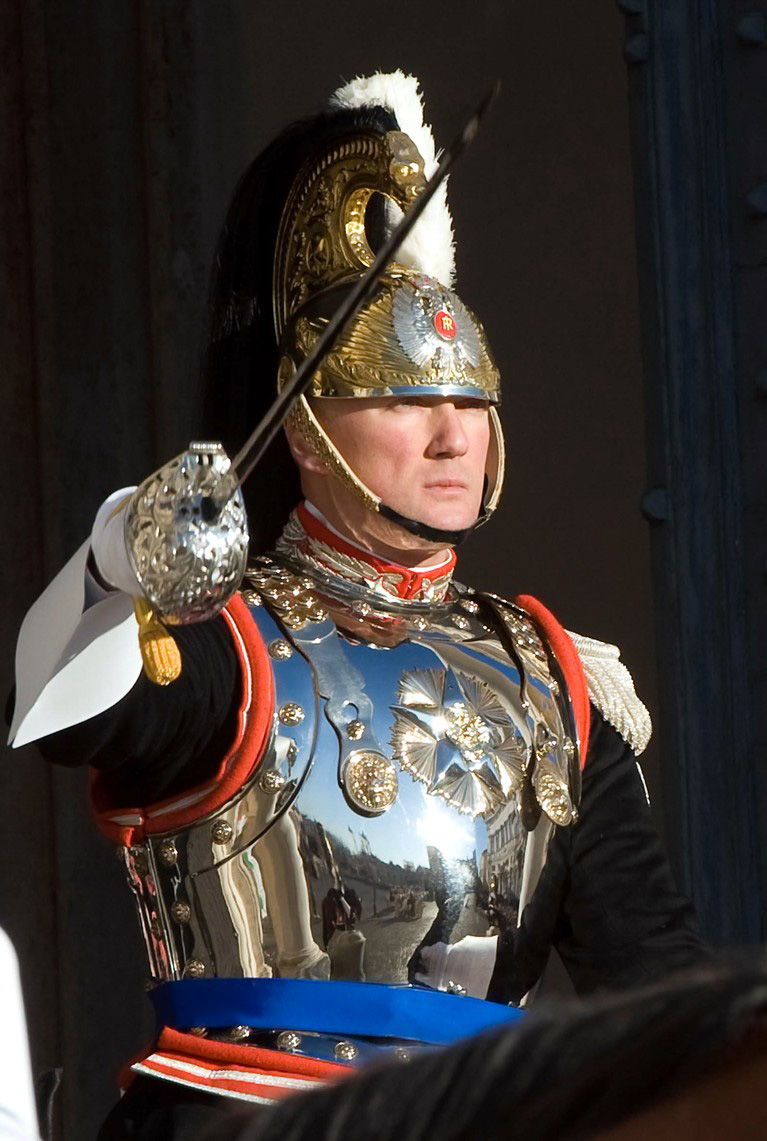