The unique and iconic Hat used by 19th Century Italian Elite Forces known as The “Alpines”, these were specially trained Soldiers in Mountain Ranges throughout Italy. The Hat chosen to set them apart from regular Infantry, was of a sloping, Felt Green construction. Featuring a longer Brim in the Front., the Brim sides were much smaller and often curled upwards. A Leather Hat Band adorned the Crown. The addition of a Feather worn on the Left side, often identified a specific Unit or Specialty – by color. By the 20th Century, a basic Black Raven feather was adopted. The Alpine Units became known as The “Penne Nere” or “Black Feathers”.  Unit insignia was placed on the Front of The Hat. These could be embroidered or Brass Plate. The Feather itself, is fitted into a wooden block called a “Nappina”. Various colored threads (also identifying the particular Military specialty), is placed through The Nappina. The Cappello Alpino is worn by all Classes of Alpine Forces, including Officers. Used even today, as is custom, one’s Rank is sewn into either the right or left side of The Cappello. There are currently 15 Regiments of ''Alpino'' in Italian Service. 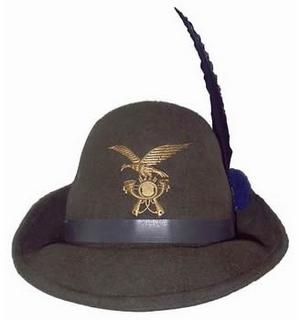