The Arditi were an Italian Special Operations Force raised by The Kingdom of Italy for service in World War I. Known as ''The Daring Ones'', they were legendary Shock Troops during The War. Disbanded after The War, they were briefly re-envisioned by Italian Dictator Benito Mussolini during World War II. The Arditi used a psychological emblem flag, based upon those used by many Pirates and Privateers (The ''Jolly Roger''). Although some Units of Arditi used identifiers (Unit Numbers) and various ''patriotic phrasing'', most carried the Banner unadorned – save their general insignia. The Field of The Arditi War Flag was Black in it's entirety. Centered was a Human Skull in frontal profile. Surrounding The Skull cranium was a ''Grass Crown'' or Laurel (long a symbol of Ancient Roman heroics). Positioned in the clenched mouth of The Skull, was a fighting knife (the primary weapon of The Arditi). The same emblem was also used as their Uniform Patch, which was a small circular device worn on the uniform sleeve.

During World War II, The Arditi Flag was much different and bore no resemblance to it's former World War I pattern. This version was a Red Field in it's entirety. Centered was a full colored Roman Fascine (The symbol of The Imperial Office of Lictor). This was a bundle of wooden rods surrounding a Labrys Axe. The Fascine was shown laid on it's side – or toppled. The Labrys Axe was shown slicing through the rods (to symbolize the destruction of The Monarchy and establishment of Mussolini's Socialist Government). Various patriotic phrasing were applied to banners both above and below The Fascine An elongated Laurel was used as their uniform patch, with a Fighting knife placed in the center. This too was placed on the uniform sleeve. 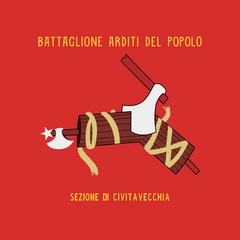 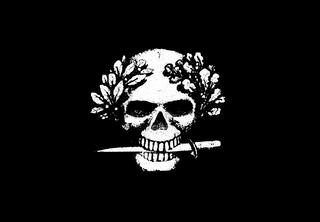